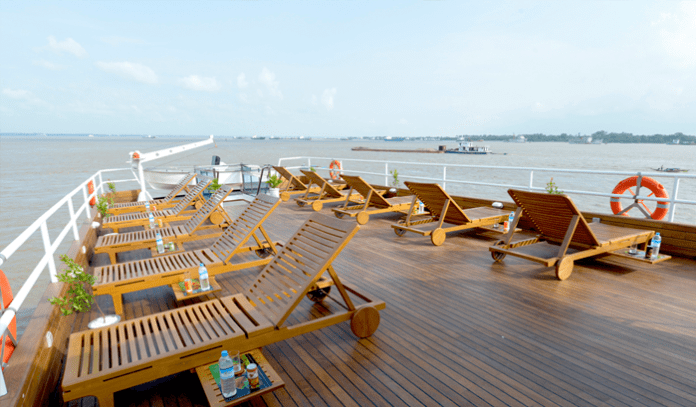 Both state-run and private Yangon river sightseeing and leisure cruises will resume in October as the monsoon season comes to an end, the operating firms said.

“The cruises, which have been halted due to the heavy rain, wind and weather, are to be resumed in October, as soon as the private ships start running. We will run the course with two ships,” U Myo Naing, assistant general manager of the Inland Water Transport (IWT), said.

The department has two ships, named Toe Pwar and Tay Za, which are fit for sightseeing trips in the Yangon river. Toe Pwar was previously used only for charter trips, but both ships will accept individual passengers this year.

Boarding Tay Za for the trip will cost $12 for a foreigner and K10,000 ($10) for a local passenger. The passengers will receive a complimentary beer or a soda during the trip, which lasts around one and a half hours. The cruises run every Tuesday, Wednesday, Saturday and Sunday. The charter price for Toe Pwar is $700 for a three and a half-hour trip along Yangon River.

“Our ships will start running on October 1. We only launched our business last November but we have attracted quite some attention,” U Yan Lin Kyaing, manager of private cruiser Royal Green River, told Myanmar Business Today.

Royal Green River Prince will offer a dinner cruise on Friday, Saturday and Sunday from 5 to 7pm. The fares of the cruise that serves a Chinese buffet on board are $30 for foreigners and K25,000 ($25) for a local passenger.

The ship also runs the sunset-viewing sightseeing course on Tuesday and Wednesday, charging $20 to a foreigner and K15,000 ($15) to a local, which also includes fried chicken and a drink.

Royal Green River Baby, with the capacity of 12 passengers, is only available for charter. The lease price is $75 per hour with a minimum charter fee of two hours.