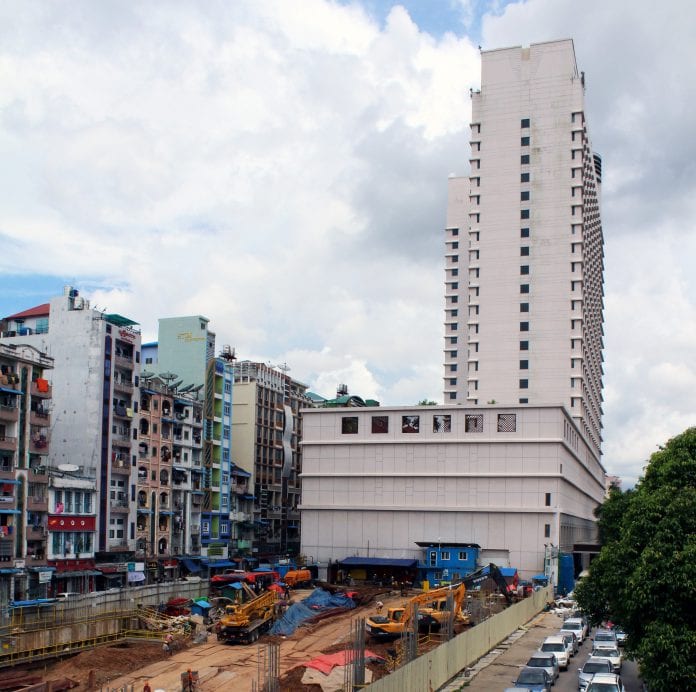 Yangon’s office real estate market will remain dynamic in 2015 and beyond, according to American real estate services firm Colliers International.

Office rental rates will continually trend upwards albeit at a more moderate rate than in the past two years, Colliers said in its 2015 Property Outlook.

The demand for office space will constantly be driven with the entry of foreign companies concurrent with the expansion plans of local firms, the report projects.

However, continuing barriers to entry for key sectors such as banking and insurance will restrain demand until further liberalisation measures, Colliers said.

It said the market’s growth outlook is healthy while Yangon remains in the early stage of the expansion cycle.

According to Colliers, the outlook for the office real estate market in Asia looks “optimistic” for 2015, with an increasing number of multinationals poised to expand both in terms of human resources and corporate acquisitions.

Companies are also placing a greater focus on cost management and cost consciousness, leading to a drive to reduce operating costs. Rents are set to rise in the region in 2015, Colliers International forecasts. Many companies will therefore look to expand in decentralised locations to save on costs and help them consolidate operations.

Another trend to expect in 2015 is for multinational occupiers to favour disposing of real estate that they own and diverting capital to other business-investment options.

“Conversely, many domestic occupiers see real-estate acquisitions as an investment strategy, as well as an effective way to manage expenses, and so they are likely to increase their buying activity,” Mark Lampard, managing director of Corporate Solutions, Asia Pacific, said.

Many markets in Asia are set to see less new stock added in 2015 than the annual norm. In markets such as Hong Kong, that will lead to more-pronounced increases in rents.

Markets such as Chengdu, Bangkok and Ho Chi Minh City “are all cities that are expected to see a significant increase in new supply, which will more than likely lead to flat rental environments,” Lampard said.

With governments continuing with their stimulus measures in Japan and Europe, it is likely that demand for exports will improve. Asia, still heavily dependent on exports, is set to benefit from any pickup in global growth. The election of pro-business governments in India and Indonesia should also be positive factors for those nations.

The office leasing market in Asia should remain healthy in the year ahead. Although Colliers anticipates a rise in US interest rates in 2015, rates remain low by historical averages. Multinationals are also benefitting from declining energy costs, with oil having slumped considerable in 2014.

Both factors are helping to improve profit margins, a welcome sign at a time that top-line revenue growth is expected to be only mildly positive. Colliers forecasts that gross domestic product will pick up by an average of 40 basis points across Asia in 2015.

In China, Colliers anticipates that companies in the e-commerce and finance industries are set to show exceptional growth in 2015, thanks to supportive government policies. In India, energy and

construction groups will be expanding, and demanding more office space.

In Asia as a while, on the policy front, Colliers predicts that some of the cooling measures introduced in various markets in recent years will be relaxed, particularly when more realistic levels of supply lead to an increase the existing office stock.

With the cost of borrowing rising and yields largely compressed for prime assets in core locations, investors will have to behave differently to produce returns. Value-added opportunities will achieve that purpose with landlords repositioning existing projects or converting them for other use.