Yangon’s Bus Privatisation to Go Ahead This Month 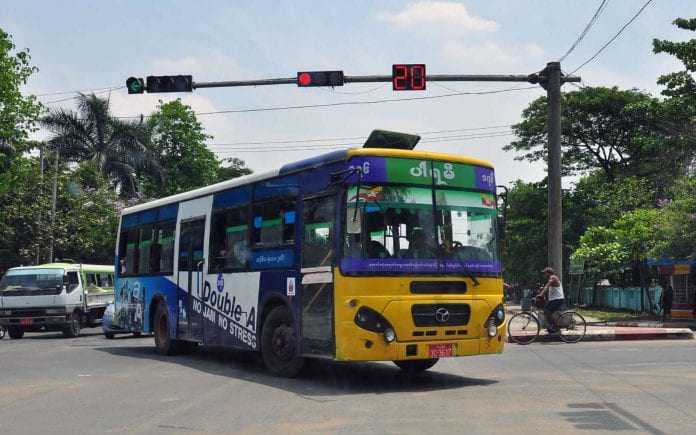 Privatisation of Yangon’s bus lines will be implemented in two phases starting from this month, a Ministry of Commerce official said.

A public company will be set up, where government will have a 40 percent stake and the rest will be offered to the public through shares – at K100,000 per share. The public will also be able to supply buses instead of money to receive shares in the company.

Dr Maung Aung, an advisor to the Ministry of Commerce and the head of the privatisation project, said, “We need to repair some roads. Bus stops and ticket centres should be built, so it will take some time to begin operations.”

The first phase will be implemented over a five-month period and cost over K25 billion, he said. The government has allotted K10 billion for implementation of this system and the public company will get K15 million in loans from private banks.

He said that the plan is necessary due to Yangonites’ dependency on the bus transport system. “Bus drivers here do not follow regulations and drive selfishly. That’s why we are founding this company, so that bus drivers will get paid on a monthly basis and may follow the regulations.”

The initial bus lines will operate on Pyay and Kabar Aye Pagoda roads, and from Shwepyithar, Hlaingtharyar, Parami, Dagon and Thilawa industrial zones. Dr Maung Aung added that buses will be stationed in Mingaladon for them to avoid entering into downtown areas.

The new bus company will order only left-hand drive vehicles and a ticket system will be adopted so that no assistant to the driver is required, Dr Maung Aung said.

U Tayote Lay, owner of No.48 bus line, said, “We are still waiting on the confirmation of the regulations and eager to see how the system will function.”

U Myo Myint, managing director of Bandoola Transport Co Ltd, said, “It is a good idea to reform the bus transport system and we welcome the initiative. Neighbouring countries have been doing this and they have been successful. This would reduce accidents and improve travel safety.”

The current bus lines will still be allowed to operate even with the new system in place, authorities said.

Currently, there are over 3,600 buses with over 360 bus lines in Yangon, transporting over 2 million passengers daily.