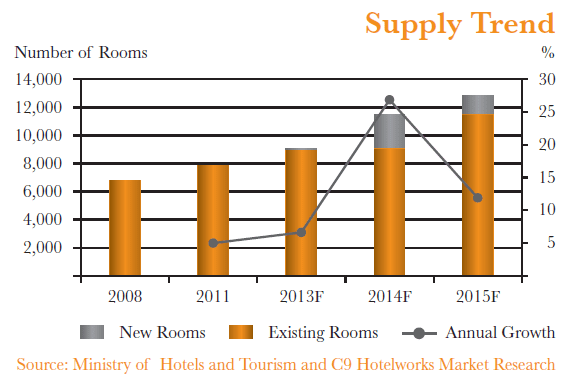 Myanmar’s hotel market is set for a potential threefold boom, although speculation driven land prices are impeding the growth of the new economic frontier’s hospitality sector, a recent report revealed.

Over the next two years with over 3,400 new rooms in various stages of development, Yangon could see the segment triple in size, tourism and property consultancy firm C9 Hotelworks said in its Yangon’s Hotel Pipeline report.

“While the hospitality sector has enormous room for growth, Yangon remains in an early stage of development,” Bill Barnett, managing director of C9 Hotelworks, said.

Yangon’s hotel rooms serve the top five tourism markets of Thailand, China, Japan, the US and South Korea, which together provide 48 percent of guests. Free independent travellers also surged by 72 percent in 2012.

The top two markets are Thailand with a 16 percent share and China with 12 percent. In the first five months of 2013, visitor arrivals to Yangon exceeded the entire number in 2012, reflecting year-on-year growth of 36 percent. Regional Asian travellers represent the majority of visitors to Yangon, accounting for 66 percent of the total.

In the first 10 months of 2013, hotel occupancy averaged 69 percent with an average daily room rate of $170, said C9 Hotelworks. With over 9,000 hotel rooms in Yangon, only about 20 percent are of international standard.

Myanmar is now developing a new international airport at Bago, 80 kilometres north of Yangon, with an annual capacity of 12 million passengers to meet an expected growth in business and tourism arrivals.

“With the airport set to open in 2017, hotel investors increasingly have to take a forward looking view of where the dust will settle on Yangon’s changing landscape,” Barnett said.

However, investment in Myanmar’s hospitality sector has fallen well short of forecast growth, mainly because of speculation driven land prices.

According to C9’s report, foreign direct investment into hospitality assets remains sidelined in many cases with concerns over the lack of a debt market and a slow government approval process.

“To date, a disconnect between the expectations of the private sector and ability of the government to broadly implement free market reforms remains at a critical junction,” the report says.

The report also focused on the current transition period that Yangon is undergoing and the stress that an open economy which has seen a massive influx of new automobiles, is having on the city’s transportation infrastructure.

A continuing surge in land prices in areas such as Yangon indicates large-scale property speculation, while plans to redevelop government-controlled properties in the city face challenges, the report said.

“Most of the deals being done for hotel assets in the current landscape are from local parties and not overseas groups. Given [that] Yangon has captured investor sentiment as a Southeast Asia hot spot, it has yet to deliver on its expected promise,” he added.

In both hospitality and real estate, C9 Hotelworks is now working on many projects in Myanmar, catering for keen interest from both Thai and international investors.

Uncertainties over Myanmar’s ownership legislation and investment law pose risks for which investors should expect superior returns, he said.

“At the moment the country has retained strong investor interest but converting this into more tangible results is going to take longer than the market has expected,” Barnett said.

Reflecting its continuing shortage of hotels, rooms at upscale and luxury properties in Myanmar can run at $150-250, similar to the rate for unsophisticated Bangkok hotels, Barnett added.

Barnett said: “The hotel storyline is not all rags to riches as there remains a keen level of trading volatility given tourism seasonality and the impact of the annual monsoon season. Once new inventory starts entering the supply side rates will start to normalise and the industry’s challenge will be on growing sustainable demand.”