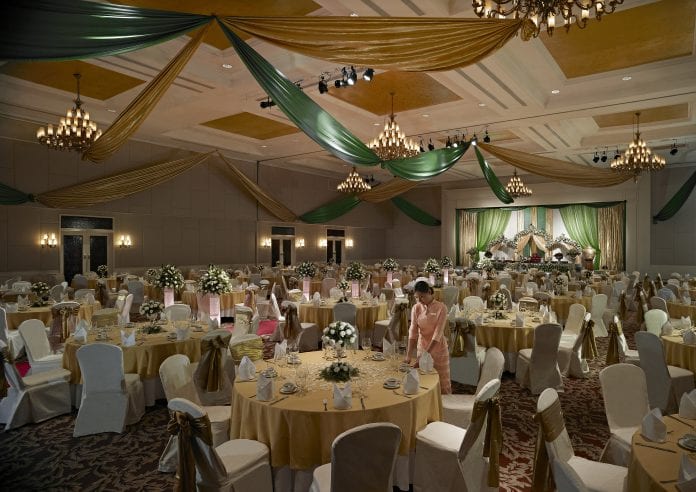 Hong Kong-based hotelier Shangri-La Hotels and Resorts said it has rebranded its Traders Hotel in Yangon to operate as Sule Shangri-La following an extensive renovation that took two-and-a-half years to complete.

The 484-room hotel, which is on Sule Pagoda road near the landmark 2,000-year-old namesake pagoda, has been a major fixture in the city’s central business district since it opened in November 1996. Nearly two decades on, the hotel continues to be Yangon’s most popular gathering and networking spot for businesspeople and hotel guests.

A key port in the British Empire, Yangon still boasts vestiges of its colonial past after nearly a half-century of isolation. Shangri-La said it is “the essence of this history and Myanmar’s rich culture that the newly branded Sule Shangri-La captures with a design that effortlessly mixes elegance and simplicity.”

While the exterior of the building is modern, the lobby of Sule Shangri-La evokes bygone colonial days with white columns and a staircase that ascends to an open balcony. The impression extends to the adjacent double-height lobby lounge where a tiered crystal chandelier highlights a wall mural and panel with peacock motifs – the green peafowl, called the U-Doung in Burmese, is one of the country’s national animals.

Hotel staff uniforms will now also celebrate Myanmar’s history, incorporating the traditional longyi, a large sheet of cloth folded to form a cylindrical shape, in styles specially designed for the hotel, the authorities said. Doormen will wear a range of seven different uniforms, each representing the seven states of the country.

The public areas reveal more cultural components of the property with tall ornate Burmese vases, panes of woodcarving and specially commissioned art pieces by local artists such as Ba Khine and Hla Phone Aung, whose artworks decorate the hotel’s cafe, conference rooms and suites. The hotel is a showcase for local artists and craftsmen, and their works are creative depictions of Burmese stories, Shangri-La said.

The Gallery Bar was modified to reflect a public drinking house from the past British era, Shangri-La said. Half-curtained glass windows allow a peek of the dark wood interior with wrought iron and brass details. Memorabilia and photographs from the early 1800s fill the walls and the comfort menu includes homemade shepherd’s pie, steaks, light bites and crisp cold beers. Its balcony has an encompassing view of the Lobby Lounge which constantly bustles with patrons.

The hotel’s renovation also included the three other venues – Cafe Sule for international flavours and Asian favourites; the Peacock Lounge, an informal meeting ground for catch-ups between friends or executives, and the Gourmet Shop serving freshly baked goods, snacks and beverages. All outlets are the first in Myanmar to be awarded the Hazard Analysis and Critical Control Point System (HACCP) certification for world class standards of food management and hygiene.

For recreational pursuits the Health Club, which overlooks the outdoor pool, offers an expanded space of over 850 square-metres of fitness equipment, sauna, steam and massage rooms. The hotel’s meeting spaces – regular hosts of delegations and dignitaries – span three levels at Sule Shangri-La.

On the top floor of the hotel are three refashioned suites bordered by views of Yangon city or Yangon River. Incorporating artefacts to display Myanmar’s much-admired handicraft, they are swathed in plush fabrics and trimmed with dark wood. The suites, including the city’s largest Presidential suite, measure between 66 and 189 square-metres and are designed for relaxing and working in separate areas. Bathrooms are fitted with a bathtub, rainforest shower and quality amenities.

Travellers in search of an exclusive retreat will enjoy the new Horizon Club Lounge. The executive lounge was relocated to level 21 to offer an unobstructed view of Shwedagon Pagoda and enlarged to over 490 square meters to provide additional seating and two private meeting rooms.

As part of the Horizon Club benefits, guests will enjoy personal check-in and late check-out at the lounge, complimentary beverages and refreshments all day, a dedicated concierge and wifi access. Other guest privileges that come with Horizon Club floor accommodation, on levels 18 to 22 of the hotel, include complimentary breakfast, in-room wine and snacks upon arrival, suit pressing and daily fruits.

“It’s exciting to see the luxury enhancements of the hotel and to introduce Shangri-La’s signature touches in such a desirable destination,” said Philip Couvaras, area general manager of Sule Shangri-La, Yangon.

“We look forward to continuously providing our guests with new and personal experiences, and to help immerse visitors into the local culture.”

To mark Sule Shangri-La, Yangon’s rebranding, the hotel has introduced a “Celebration Package” priced from $215 per night, subject to tax and service charges, until 31 July. A minimum two nights’ stay in a Deluxe Room includes one way airport transfer (pick up or drop off) and $40 hotel credit which may be used for hotel food and beverage, laundry, massage services and at the beauty centre.

Shangri-La Hotels and Resorts currently owns or manages more than 80 hotels under the Shangri-La brand with a room inventory of over 34,000. The group has a substantial development pipeline with upcoming projects in China, India, Mongolia, Myanmar, Philippines, Qatar, Sri Lanka and the United Kingdom.