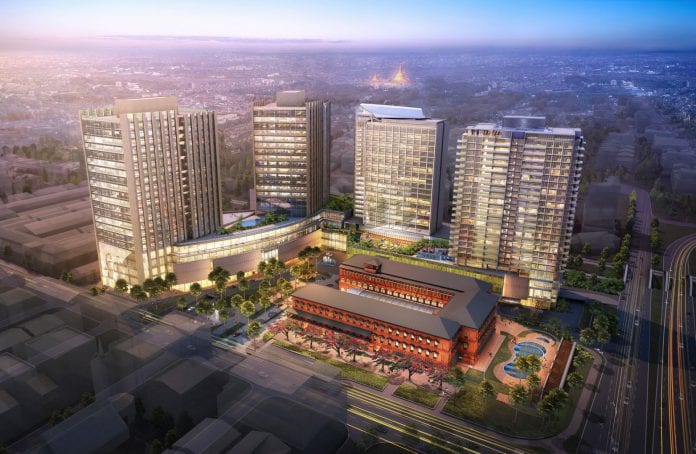 Singapore-based conglomerate Yoma Strategic Holdings was granted by the Myanmar Investment Commission (MIC) an extension of a lease to develop the former headquarters of the Burma Railways Company into a five-star hotel, the firm said in a stock exchange filing.

Meeyahta International Hotel Ltd (MIHL), a company in which Yoma holds an effective interest of 80 percent, holds the land development rights for the downtown site in Yangon dubbed as the “Landmark Development”.

The site currently comprises the Grand Meeyahta Hotel, which had ceased operations in October 2013 to make way for the proposed redevelopment, and the former headquarters of the Burma Railways Company which is a heritage site built in 1877.

Yoma said the firm and its joint venture partners intend to develop the site into a mixed-used development “The Peninsula Yangon”.

“The company is delighted that this decision has been reached by the MIC after a protracted period of negotiations with the relevant authorities and will commence immediately on the necessary steps with the Ministry of Rail Transportation to finalise the lease extension of the sites for the Landmark Development,” Andrew Rickards, chief executive of the company, said in the filing.

The approval announcement drove shares of the SGX-listed firm sharply higher amid heavy volume as investors piled into the stock, Singaporean media reported. On March 11, Yoma stocks closed at 44 cents each, a 12.8 percent rise from the previous close, with about 26.5 million shares changing hands.