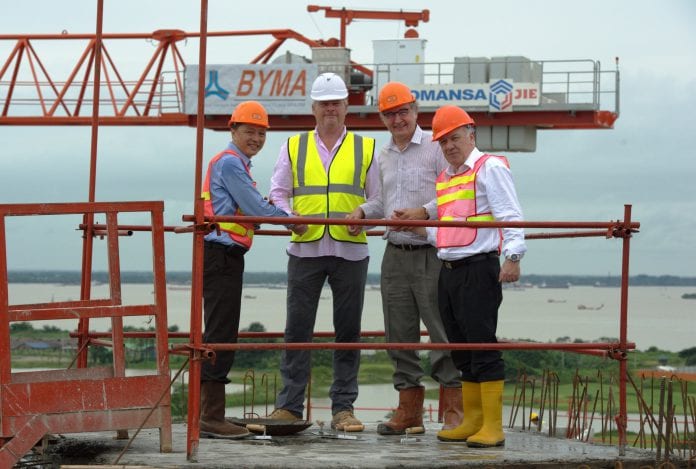 Yoma Strategic Holdings Ltd celebrated a topping out ceremony, a traditional building construction event, in Zone B Building B1 of its Star City residential development, the Myanmar-focused company said.

Situated on a 135-acre site in the rapidly developing Thanlyin Township in Yangon, Star City is one of the large-scale developments in Yangon. Zone B is the second phase of the estate which construction commenced in April 2013 and completion is targeted to take place by the first quarter of 2016.

The first two phases of Star City, Zone A and Zone B, are an assembly of 10 star-shaped buildings with 2,000 apartments. Yoma said all apartment units launched in Zone A have been sold out and many homeowners have moved in to Star City.

“More than 90 percent of the 1,043 units in Zone B have been sold within a short timeframe to homebuyers and investors looking for quality housing units in Yangon,” said Elmar A Busch, co-head of Yoma Strategic’s real estate division.

“Star City Zones A and B are only the beginning of one of the finest master-planned communities in the country,” he added.

Singapore-based Yoma claims Star City’s “community within a community” concept is the first of its kind in Myanmar, allowing residents to avail themselves of a full range of features and services managed by Yoma Strategic’s estate management division. Star City also offers scheduled shuttle-bus services seven times a day to locations in downtown Yangon.

“Yoma Strategic is committed towards building the Star City estate in adherence to the highest quality standards and delivering apartments to buyers in a timely fashion. To be able to do this and to strengthen Star City’s position as the residential development of choice in Yangon, we work with a world-class construction team which employs international construction methods, technology and training,” said Busch.

Leading retailers and restaurants are operating or are set to open shortly at Star City, Yoma said. City Mart, one of Myanmar’s largest supermarket chains and 50th Street Restaurant and Bar have already opened, while Japanese restaurants such as Izakaya Ren, Edo Zushi and YKKO noodles are due to open. YOMA Bank has also set up a branch at the estate.

Star City Amenities include 24-hour security, public area housekeeping and a service centre which manages the needs of residents, from repairs to renovation arrangements. Landscape upkeep and a flood management system are also in place to ensure that the environment remains well-maintained and attractive, Yoma said, adding that an Olympic-inspired swimming pool and sports and recreation centre are also set to open by end-2015.