Yoma Yangon International Marathon to be Held in Jan’15 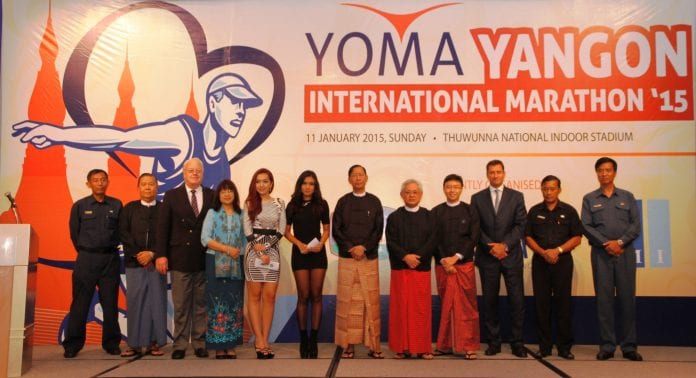 The third Yoma Yangon International Marathon (YYIM) will be held on January 11 next year, the marathon’s organisers announced.

The organisers – First Myanmar Investment (FMI), a subsidiary of Yoma Strategic Holdings, and Yangon City Development Committee (YCDC) – said they hope to grow the marathon participant base to 4,000 runners in 2015, up from about 3,000 local and international runners this year.

“Yoma Strategic is thrilled to present the Yoma Yangon International Marathon 2015. It is important that we continue to grow the event with each year and to attract more participants,” Serge Pun, chairman, Yoma Strategic, said.

“International marathons bring together people from all over the world with a passion for running and represent peaceful competition and the importance of a healthy lifestyle. I look forward to joining the expected 4,000 runners at the starting line come race day,” he said.

Officials from the organising team are working closely with YCDC to ensure that Yangon’s only road race and its surrounding event activities are an even better experience for every participant, the organisers said.

Registration for YYIM 2015, billed as the nation’s largest marathon, started from August 18 and will continue until December 12.

Registration of participants will be served on a first-come-first served basis and Yoma said “runners are encouraged to register early to avoid disappointment.” International participants can enjoy “Early Bird” rates until October 10.

The start and finish point of the various races is Thuwanna Indoor Stadium. Event organisers are working with YCDC to improve the course route based on feedback received from the 2014 marathon and the official course routes for YYIM 2015 will be announced closer to the event date and will be available for viewing on the event website, Yoma said.

Some of the sites in Yangon that the marathon course route will include are Botahtaung Pagoda, Shwedagon Pagoda and Inya Lake.

Yoma said a new philanthropic component will also be introduced for YYIM 2015 whereby selected ‘Charity Ambassadors’ will use the race as a platform to raise funds and awareness for chosen charities. Although the charities have yet to be named, the common theme will be charities that support children in Myanmar.

The organisers of YYIM 2015 urged the participants to raise money for the charities by personal sponsorship or donation. An announcement will be made in the coming weeks regarding how interested runners and members of the public can support the Charity Ambassadors and contribute to the selected charities.

YYIM 2015 sponsors will be announced in the coming months. Parties interested to be a sponsor of YYIM 2015 can write in to info@yomayangonmarathon.com.