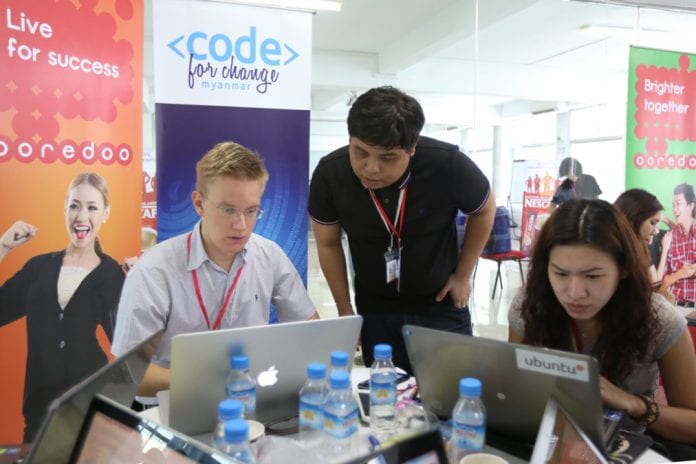 Myanmar’s first-ever “hackathon” finished last weekend after an intense 48 hours. The hackathon, which was organised by Code for Change Myanmar, brought together 76 local young developers, designers and entrepreneurs.

When the program began at 6pm on March 14, the participants were presented with eight problems from six different NGOs – problems ranging from how to help women manage birth spacing to how to make it easier for farmers to optimise irrigation.

The participants then divided into 17 teams and spent all weekend developing technology-based solutions to these problems. Many teams worked non-stop for 48 hours, the organisers said.

On March 16, each team had only three minutes to give a demonstration to the judging panel of the app or website that they had built. The panel included Thaung Su Nyein, chief executive of Information Matrix, Hnin Hnin Pyne, senior human development specialist, World Bank, Aye Mya Hlaing, principal, The SUN Institute, and Phil Morle, chief executive Pollenizer Global

The judges said the standard of work and presentation was “extremely high.”

Phil Morle, who is a veteran technology entrepreneur and investor, said: “I have participated in, judged and run hackathons all over the world and this was one of the best I’ve ever seen. What these young people achieved this weekend astounded me – and not just the winners. The energy and talent of the Myanmar tech community is inspiring”.

First prize was awarded to Team “NilBug” who built an Android app that allows farmers to share and receive alerts about nearby pests and diseases. The team’s presenter Ko Arkar Min Aung said: “It was a great chance to apply our skills to address important problems in Myanmar. We learnt a lot, had great fun and built a cool product with the power of team spirit. The other teams did so well I can’t believe we won.”

First prize was $1,000 to share, as well as a SingTech Sapphire iTab Mini and a copy of Morle’s book StartUp Focus for each member of the team.

Proximity Designs was the NGO that submitted the problem that the winning team worked on. Daw Debbie Aung Din, co-founder of Proximity Designs, said: “This hackathon was a great opportunity to work with Myanmar’s technology community on real issues that farmers deal with.

“We’re looking forward to working with them to test their ideas and to develop them further.”

The second prize went to team “Electage” whose product, also an Android application, was designed for election monitoring teams to report on irregularities during the 2015 election. As well as a working Android app, they prototyped an iOS application and a web platform. They won $500 to share and SingTech’s smartphone, a Sapphire Prime for each team member.

Third prize went to team “Mild Product” who developed a graphically engaging way of helping women manage their birth spacing. They won $250 to share and a SingTech iPure smartphone for each team member.

“We’re looking forward to organising more events like this.”

Ross Cormack, chief executive of Ooredoo Myanmar, which also supported the event, said: “The apps that these young people built at this hackathon are a great example of the ways in which improved telecommunications is going to accelerate Myanmar’s development”.