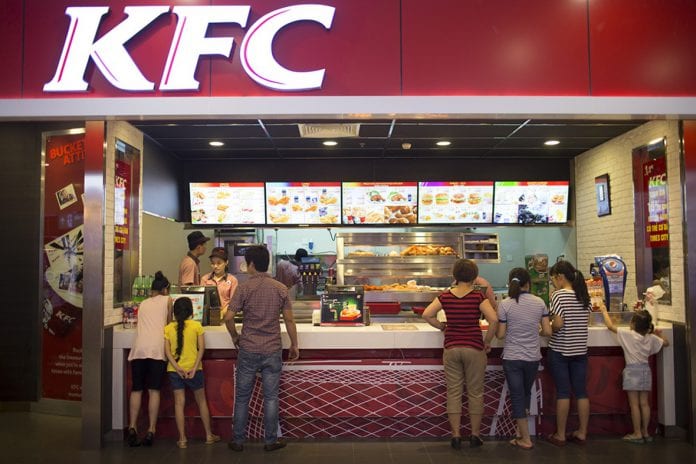 American fast-food conglomerate Yum Brands Inc, in partnership with Singapore-listed Yoma Strategic Holdings, is set to bring the first KFC restaurant to Myanmar next year, becoming one of the first Western fast-food chains to foray into the emerging market.

Yum is the world’s second largest restaurant chain in terms of sales after McDonald’s, with over 18,000 outlets in 118 countries worldwide. The company, with $23 billion in global sales, also owns the Pizza Hut and Taco Bell chains.

“We’re excited to work with such a well-respected franchisee to bring the great taste of KFC to Myanmar, an important emerging Asian economy with a population of 50 million people,” Pant said referring to Yoma Strategic, its franchise partner.

“Bringing KFC to Myanmar is an important step to achieving Yoma Strategic’s goal in being a key player in the country’s food and beverage sector,” said Serge Pun, executive chairman of Yoma Strategic.

Myanmar is one of the potentially sizable consumer markets to emerge among developing economies. With 50 million people and a growing middle class with disposable income, the country offers significant consumer opportunity for KFC to grow over the long term.

The announcement that KFC will become one of the handfuls of quick service restaurants to enter the Myanmar market has also created excitement among the fast-food restaurant goers in Yangon, especially the young consumers.

“I’m really excited. I heard that KFC’s fried chickens will be way better than the fried chickens that we get here now. I want to taste it,” said Ko Chan, an East Yangon University student, who frequents Yangon’s other foreign fast-food chains.

However, less than four out of 10 consumers in Myanmar frequent restaurants, according to Boston Consulting Group’s report, which said the country’s middle and affluent classes are estimated to double by 2020.

“Myanmar offers significant macro potential for an international quick service franchise with a growing consumer class that is forecast to grow from 2.5 million today to 19 million in 2030, potentially tripling consumer spending by more than threefold,” Pun said.

“In a regional context, Myanmar should experience a strong growth trajectory. The consumer and retail sector is key to Yoma Strategic’s strategy to capture the rapid increase in discretionary consumer spending in the country and KFC is the cornerstone of our business platform in this space.”