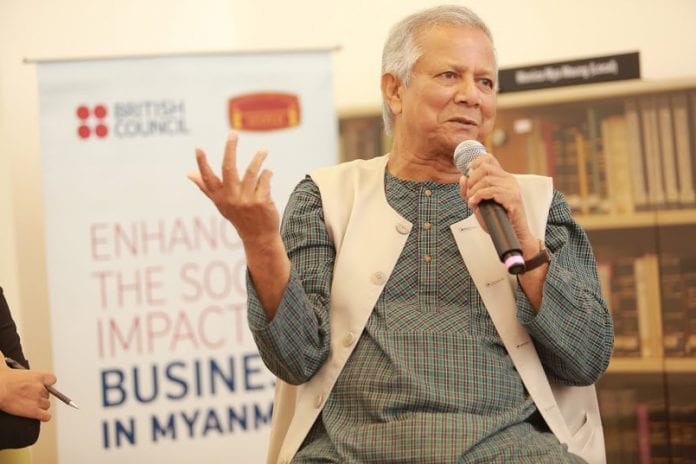 Nobel Peace Laureate and social business pioneer Professor Muhammad Yunus visited Myanmar as a guest of the British Council between 19 and 22 July. Professor Yunus’ visit focused on the important role that business can play in support of poverty alleviation in Myanmar.

Since embarking on a process of national reform, the Myanmar government has made a commitment to promoting economic development that benefits all. President Thein Sein earlier said, “We must move towards an economy that is equitable, that is fair and based on a level playing field.”

Pioneering the concept of microfinance in the late 1970’s, Yunus founded the Grameen bank in 1983 in Bangladesh. Since then microfinance has become a powerful tool used to improve lives, combat poverty and empower women across the globe. Professor Yunus was awarded the Nobel Peace Prize in 2006.

Addressing a select group of leaders representing both business and civil society at the British Council in Yangon on July 20, Professor Yunus said: “Not only the government, companies and foundations, but also individuals can launch social business and become involved in addressing a social cause that they care about.”

Responding to Yunus’ keynote address in Yangon, Professor Dr Aung Tun Thet, the President’s senior economic advisor, said, “The visit of Professor Yunus is very important and timely; as a pioneer of social business in Bangladesh, the ideas he has promoted have been spread all over the world.

“I am hoping that his visit to Myanmar will promote and strengthen the social business movement in this country.”

Kevin Mackenzie, director of the British Council, highlighted the relevance of Professor Yunus’ ideas to Myanmar as the country proceeds with national reform.

“I am delighted to welcome Professor Yunus. He is a world authority in helping the poor bring about their own development, and his insights could not come at a better time.”

Professor Yunus has long been a critic of the capitalist system arguing that it does not allow the human qualities of compassion and collaboration to be fully expressed. He famously said, “I believe that we can create a poverty-free world because poverty is not created by poor people. It has been created and sustained by the economic and social systems that we have designed for ourselves.”

Present at the Yangon event were senior figures from the emerging social business sector. Debbie Aung Din, the founder of Proximity Designs, one of the most well-known social businesses in Myanmar, highlighted the importance of this landmark visit, saying, “Myanmar’s longstanding tradition of charity while good, has at the same time been patronising  towards poor people; social businesses treat people as customers with dignity and give them choice. It’s a relationship based on equal exchange rather than based on sympathy.”

On day two of his visit to Myanmar, Professor Yunus spoke to a group of senior government officials hosted by the Ministry of National Planning and Economic Development. The British Council, which has been working with the ministry to promote social enterprise, said it plans to continue to build the capacity of government officials to better understand how to establish an enabling environment to maximise the social impact of business in Myanmar.

The Chair of the Social Enterprise World Forum and CEO of Social Enterprise UK Peter Holbrook, said at the event: “Myanmar has a bright future and social enterprise presents an opportunity to ensure that everyone can benefit from its economic development.”