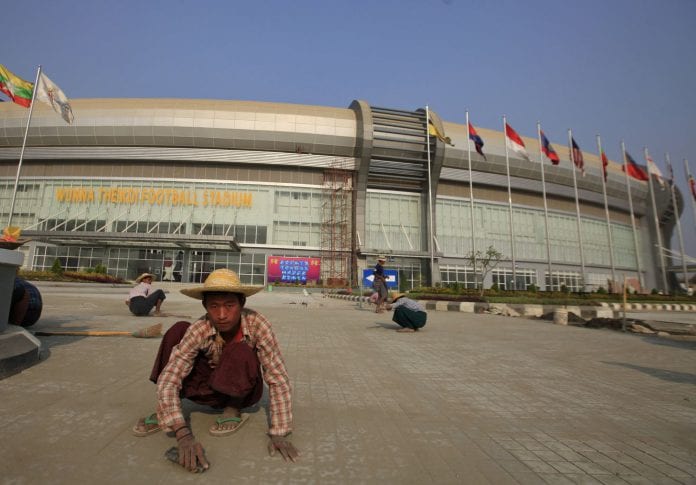 Myanmar is “100 percent ready” to host the Southeast Asian Games, which officially got underway in the capital Nay Pyi Taw on December 11.
Htay Aung, sports ministry director, told AFP that the final rehearsals had successfully been held and that the country, which is only just emerging from 50 years of military rule, is ready to hold the event – the biggest sporting event in the country’s history.
The tournament, which brings together athletes from Southeast Asia’s ten-member countries, was handed to Myanmar in 2010, shortly before the government began introducing a range of economic and political reforms aimed at pulling the country from decades of stagnation.
It left a country with little infrastructure that has struggled to cope with the sudden surge of interest from overseas visitors who have been intrigued by the unique changes taking place in the country.
However, the tournament has given the government an incentive to invest heavily in infrastructure in the capital.
One example is the newly built Wunna Theikdi Stadium, located in Nay Pyi Taw, a 30,000 seat football and athletics stadium, which hosted the opening ceremony.
According to Htay Aung, 6,000 athletes and 3,000 journalists are due for the games, as well as “hundreds of thousands” of local fans. The majority of events will take place in Nay Pyi Taw, while former capital Yangon will host some events such as Chess and Weightlifting, and Sailing events will take place in Ngwe Saung. Mandalay will also host some football matches.
The Games, which are the 27th version of the event, are seen as an opportunity for Myanmar to showcase that it is able to cope with the increased attention that it is receiving.
Vice President Nyan Tun has urged athletes to “strive for a golden age of Myanmar sports… improving the reputation of the country and making history to be regarded as sporting heroes.”
Despite the overall optimism, some government officials are privately concerned about the country’s ability to host the event, according to the AFP report.
“There are many things to be done even though many ministries are involved,” said one government official who asked not to be named. “Hotel rooms cannot be enough because many foreigners and visitors will come,” he told AFP.
Myanmar’s hosting of the Games has already come under some fire from rival countries who have criticised the decision to drop some more mainstream sports and replace them with obscure Myanmar pursuits such as Chinlone, while some international observers remain concerned about ethnic violence that continues to take place in the country.
It was announced that eleven new hotels had opened in Nay Pyi Taw last week, in time for the games. The hotels were named as Mya Nan Yang, ACE, Thurizza, Jade Royal, Aye Chan Thar, Pearl Thiri, Excel Capital, Mahn Myanmar, Mingalar Thiri, New Ayar and Jade City.